Book a personal appearance by “Aging Gratefully: The Power of Good Health and Good Neighbors” filmmaker Alan O’Hashi who will screen the film and facilitate a discussion. Stipend is negotiable!

The “Aging Gratefully in Cohousing” documentary series Video on Demand is now available. The three movies can be rented or purchased.

You can also book a screening for your community or general audience by obtaining a screening license for a nominal donation.

To purchase or rent, click on the Video On Demand (VOD) links below:

“Aging Gratefully: The Power of Good Health and Good Neighbors” (Run Time: 50min – 2017) Filmmaker and Silver Sage Village senior cohousing resident Alan O’Hashi is mostly recovered from his death bed illness in 2013. As a result of that experience he’s become much more aware of his health. One of his neighbors circulated information about a research study at the University of Colorado about the effects of exercise on brain health. Curious, he was selected to be a research subject. To measure success, one of the criteria is emotional health and strength of relationship building.

Does living in a cohousing community be an added benefit to physical exercise? He interviewed six residents of newly-formed Germantown Commons to find out their motivations to living in cohousing and whether living intentionally with neighbors was a positive experience and what physical activities happen in a group setting. 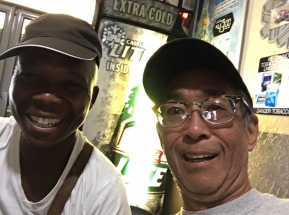 Book a personal appearance by “Aging Gratefully: The Power of Culture and Traditions” filmmaker Alan O’Hashi who will screen the film and facilitate a discussion about his experiences. Stipend is negotiable.

“Aging Gratefully: The Power of Culture and Traditions” (Run Time: 30 min – 2017) My latest trek took me to South Africa where I’m investigating a third documentary in the Aging Gratefully series. This pilot is mostly based on a little research and my initial observations spanning Tolstoy to Gandhi to Mandela to the present time.

There’s an intentional community being formed in the Town of Memel and the Township of Zamani in the South African Free State Province by a friend and colleague, Steven Ablondi and his wife Cindy Burns. Steve and I serve on the National Cohousing Association board of directors.

I tagged along with the Memel Global Community architect and my across the street neighbor Bryan Bowen and a couple of his crew, Jamison and Molly. Bryan lives in the Wild Sage Cohousing community in Boulder.

I embedded myself with a local buy named Shakes in the Black African community and even though it was only for a couple days, I gained quite a bit of insight into the cultural dynamics, which are not unlike those I encounter among my Northern Arapaho tribal member friends.

As this story develops, how Native American tribes could incorporate cohousing concepts into its growing housing demand will also be investigated. There are generations-long traditional tribal cultures that have a norm about multi-generational care for elders. Does it it makes any sense to form intentional communities around these customs?

This is a 30 minutes pilot of my visit shot mainly on an iPhone 6s and I’m not sure if anything will come of this story. I’m collaborating with a fellow filmmaker Pieter Lombaard, who appears in the short. We’re trying to figure out a good story with a great arc. What do you think? 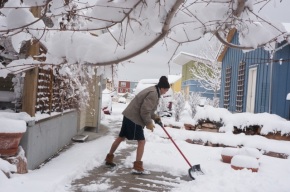 Book a personal appearance by “Aging Gratefully: The Power of Community” filmmaker Alan O’Hashi who will screen the film and facilitate a discussion about his experiences. Stipend is negotiable!

“Aging Gratefully: The Power of Community” (Run Time: 51min – 2015) In the first of the series, what if 25 senior citizens decided to grow old together in a cohousing community? Learn about their illness, angst, and fun times while owning and maintaining 16 condos, a common house and community gardens.

Cohousing is a collaborative living arrangement. Residents own their own homes, live private lives but share in the ownership and upkeep of common spaces such the garden and common house.

It’s a challenging way to live, but living together more intentionally is a hedge against being alone and isolated through the twilight years of life.

Filmmaker and Silver Sage Village resident Alan O’Hashi was on his death bed in December 2013. Following a 6 week hospital and rehab stay and a month of home confinement, he joined a yoga community to regain his strength, but learned more about himself than just getting healthier.

Through his reflections, he recounts his continuing recovery and weaves those experiences with the perspectives of neighbors with Parkinson’s Disease, Alzheimer’s Disease and those who find themselves in supportive neighborly care giving roles.

If you have questions about purchase, rental or booking a screening, email Boulder Community Media