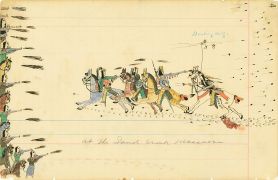 What if a Boulder, CO shaker and mover named David Nichols in 1864 recruited 100 local volunteer militiamen to train at Fort Chambers located just east of town to kill Indians at Sand Creek, and flash forward to 2018 when the city of Boulder government purchased the fort location as open space and a group of citizens works to repatriate that land, in some form, back to the Arapaho people?

Boulder Community Media was awarded a grant from the Boulder Arts Commission to produce the documentary. BCM is seeking an many small gifts from a lot of donors to raise an additional $2000.00 to match the grant.

All contributors will be added to the documentary credits

In 1875, David Nichols was the speaker of the Colorado Territorial Legislature Speaker of the House. He is known for making a “midnight ride” from Denver to Boulder to raise $15,000 in pledges from his cronies to ensure that the University of Colorado would be located in Boulder. That happened and in 1876, Colorado became the Centennial State.

But prior to that, the Indian Wars brought anxiety to established cities and towns including Boulder. Citizens feared that their communities would be over run by Natives fighting westward expansion.

An adobe fort was constructed on the Chambers property located near what is now Valmont and 61st Street east of town. Fort Chambers was where Nichols trained 100 volunteer militiamen to protect Boulder. The troops eventually participated in the infamous slaughter of 200 Arapaho and Cheyenne tribal members at the Sand Creek Massacre.

Ironically, the Chambers property was purchased by the city of Boulder as open space. The first Indigenous People’s Day organized largely by a local non-profit called Right Relationship Boulder resulted in conversations about repatriating the Fort Chambers site back to the Arapaho people. How that happens is the main subject of this documentary.

The Arapaho culture is an oral one and the project will preserve Sand Creek stories from tribal members recounting histories passed down from generation to generation.